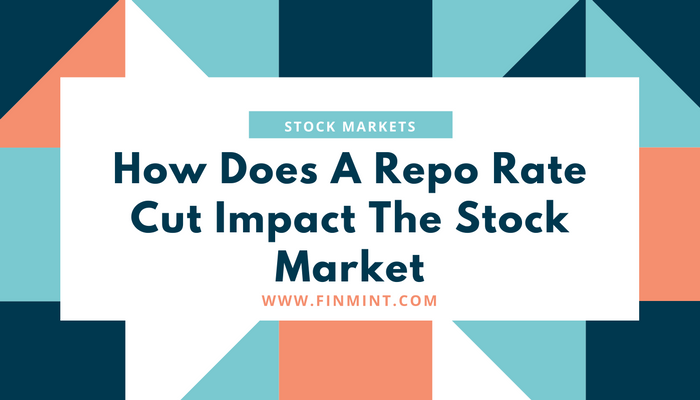 Repo Rate is the rate at which the Reserve Bank lends money to the banking institutions. It is a benchmark based on which the banks determine their deposit and lending rates.

Most banks would cut their lending rates post a cut in Repo rate. Moreover, any cut in lending rates is generally followed by a cut in deposit rates (the rate at which banks accept deposits from the borrowers).

The impact of cheaper lending and deposit rates on the Stock Markets.

A cut in Repo Rate is seen as positive news for the stock markets. The following pointers might help you see why –

Companies cheer any cut in lending rates as this reduces their existing interest expenses thereby having a positive impact on their bottom-line. Moreover, with loans becoming cheaper, companies can resort to debt-financing to fuel their growth and expansion plans.

A cut in Repo Rate would also mean cheaper Home and Car loans. This is a positive for the real estate and automobile industry – as more people will now avail such loans to fulfill their dreams of owning a house or a car.

A cut in Repo rate is also followed by a cut in deposit rates. Low rates of deposits prompt domestic investors to turn towards the stock markets (through investments in Mutual Funds and ULIPs) in search of higher returns. Greater domestic participation into the stock markets can drive the markets upwards.

In short, one can expect the markets to move up post a cut in repo rate by the RBI.

How Does a Cut in Corporate Tax Impact the Stock Markets