In this post we will discuss how you can save money on your flight bookings in India. I will show you with a practical example, how you can book flights at the cheapest rates in India.

And, I am not taking about deals or coupons here. Honestly speaking, hunting for deals on flights demands a lot of time and patience and more often than not, as I have learned from personal experience, the deal either does not work or comes with such terms and conditions attached that it actually makes it a more costly affair for you than it otherwise would.

This may be due to one or more of the following factors:

So is there a way to book a flight at the cheapest rate available without wasting time on deal hunting?

The answer fortunately is yes.

You can save money on your flight bookings in India simply by changing the platform from which you book the tickets.

As I had promised earlier, I will now share with you a practical example on how you can book the cheapest flights in India by simply changing the platform from which you book your tickets.

In my quest to find out how I can book a flight in India at the lowest price available, I decided to compare the final price charged by different online ticketing platforms for the same flight.

For my study I chose the IndiGo Mumbai to Delhi Flight ‘6E-3612’ scheduled for departure on the 01st of August 2018. I chose this flight as it was one of the cheapest rates available for the route at the time of the study which was around 6.30 PM on 25th of April, 2018.

The flight details are as Follows:

Next, I chose the following online ticketing portals to find out which of them offered the cheapest final price on the above flight:

Below I will list the Final Prices charged by each of the above portals on the Flight Indigo 6E-3612 for the departure date of 01st of August, 2018.

I tried to make sure that I check the prices offered by the given portals at round the same time so as to eliminate any timing difference on the final prices. You can see that the base price (Including taxes) charged by each of the above platforms is the same at Rs. 2,413. 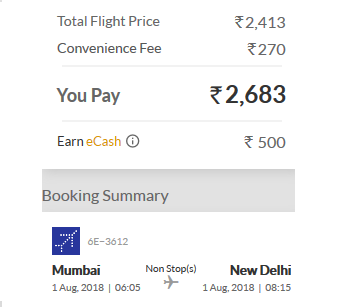 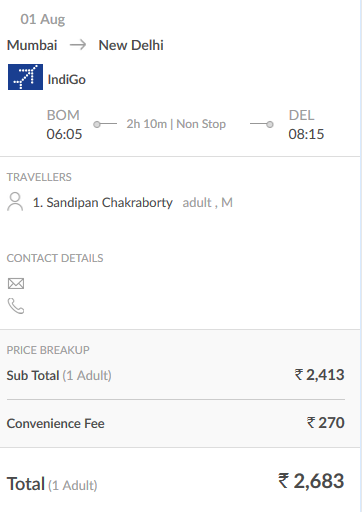 See that the prices charged by the two most popular online travel portals Yatra and MakeMyTrip are identical. This is what we call competition.

No winners at this stage though.

By this stage we are beginning to have a clear winner. IRCTC is able to offer the lowest price of the three owning to the lower booking fee charged by them. Booking fee or the convenience fee (both are same) is the commission charged by the online travel portals on the booking of flight tickets and this forms a part of their revenue.

However, no comparison would be complete without checking out the price charged when you book directly from the airline website. Surely the price should be lower than the price offered by the online travel agencies… Right? 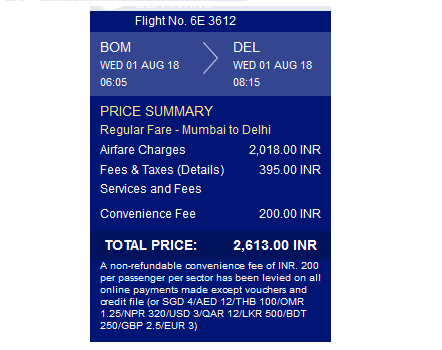 Strangely enough, the final price offered by the IndiGo Airline Website is Rs.2,613. What’s striking here is the fact they too charge a convenience fee of Rs. 200.

Clearly we have a winner here in IRCTC.

While the base fare plus taxes offered by all the portals (including the IndiGo Airlines Portal) is the same, it is the lower booking (aka convenience fee) charged by IRCTC which results in the difference in the final price paid by you.

So next time you wish to buy a ticket, head over to the IRCTC website and enjoy the lowest price on your flight bookings in India.

Note: The Fares displayed in the screenshots are inclusive of standard baggage allowance of 7Kgs (hand baggage) plus 15Kgs (Check-in). No Meals are included.

Disclaimer: The screenshots displaying the fare is taken from the respective websites. Note that this post is purely based on the research conducted by me and has not been sponsored by anyone.